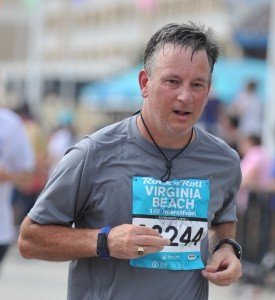 After a couple of false starts, I finally made it to the starting line of my first half marathon. My training still left a lot to be desired, however. I had hoped that my cycling would be enough to get me through the latter half of the race but I was simply not prepared for the conditions. The temperature was actually pretty reasonable but the 80% humidity was just too much.  After about 3 miles, I was as soaked as if I had climbed out a pool. Two and half hours later, I finally managed to stagger across the line.

Even so, it was still a good event. I began with two simple goals – avoid an injury and not feel so bad at the end that I’d never enter another half marathon. Both were accomplished. In fact, I had a nice bike ride the next day and have already registered for the Shamrock Half Marathon next March. Now lets see if I can get through the winter without going into hibernation again.

With the TreadTracker being discontinued, it was a pleasant surprise to hear that North Pole Engineering was releasing a

An ongoing description of my experience with the Garmin Coach Half Marathon plan by Jeff Gallloway.

Choosing and Setting up the Plan

Devices designed to simply count steps can be very inaccurate at estimating distance.