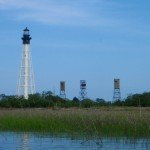 Having passed through the Eastern Shore numerous times on my way to someplace else, it was time to get over there and do a little exploring.  It was over 90 degrees and biking didn’t too appealing so I loaded up the kayak and took off. The first stop was the Eastern Shore National Wildlife Refuge visitor center where I was able to snag passport stamps for both Eastern Shore NWR and Fisherman Island NWR as well as the Cape Charles Lighthouse stamp. After checking out the trails around the old WWII gun bunker, I headed down to the kayak/canoe launch to hit the Bay. In addition to the kayak/canoe launch, there’s a boat ramp (fee required) a little further down the road for those with trailers. 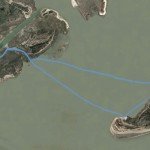 After a short paddle through the marsh, I headed out into the Bay and paddled over to Smith Island – the site of the Cape Charles Lighthouse.  I really wanted to go ashore and see if I could check out the lighthouse and WWII observation towers but there wasn’t any clear beach nearby so I paddled down to the point where the beach began and took a short break there.  Knowing that I’d be returning into a pretty stiff west wind, I headed on back for about 6.5 miles and a nice two hour paddle.

One thought on “Eastern Shore Kayaking”

I ventured a bit further south this weekend and headed down to Cape Hatteras for a weekend of biking, kiting, and kayaking. The weather was

It looks like 2010 is shaping up to be a pretty active year for me.  If things work out in the next few weeks, I’ll

I was heading home after a weekend of camping in Rodanthe and looking for someplace to kayak for a couple of hours.  I hadn’t been

Acadia National Park: Still my favorite all-around National Park. The ability to hike, bike, and kayak within minutes of Bar Harbor (as well as the