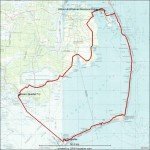 I did this ride with some friends quite a few years ago and after moving to Virginia Beach, I’d been wanting to do it again.  We originally did it in 3 days, fully loaded, starting in Swan Quarter and camping in Manteo, Hatteras, and Ocracoke.  I wanted to travel light, stay in a hotel in Ocracoke, and do in 2 days. I had hoped to do it in September, but hurricane Irene’s breach on Highway 12 just north of Rodanthe delayed it until the temporary bridge was opened.

Beginning in Manteo, the forecast predicted the wind to continue out of the northeast so I made the decision to do the Highway 12 leg of the loop first. Getting on the road around 8AM, Saturday’s ride was pretty pleasant. Mild temperatures, an occasional tailwind, and minimal traffic made for a pretty easy 79 miles down to Ocracoke.

The two early ferries from Ocacroke to Swan Quarter are 6:30AM and 9:30AM. Although it was very tempting to take the latter, I’m glad I went ahead and got out early. The wind was still out of the northeast but had pick up a bit and with the return to Manteo being almost entirely northeast, I had a feeling that I would need the extra hours of daylight.

As expected, the day was spent fighting a nasty headwind and, combined with less than spectacular scenery, it made for a long and monotonous day. I took a break after about 25 miles in Englehard which turns out to be the last town before Manteo. The next 45 miles are through some of the most desolate areas of North Carolina. Mile and mile of wildlife refuge, bombing range, and mosquitoes. Even in late October, I couldn’t stop for more than a few seconds without being swarmed. Needless to say, I pushed on until Manns Harbor where I stopped for something to drink before making the final miles over the Umstead bridge into Manteo. It’s been a long time since I was so ready to finish up a ride.

Although the section from Swan Quarter to Manns Harbor will not go down as one of North Carolina’s most scenic routes, it’s still a nice loop. If it weren’t for the headwind and mosquitoes, it would have been a fairly routine day. I won’t, however, be doing it again any time soon. I think I can find someplace a bit more scenic for my next tour.