First triathlon of 2016 is in the books. Smithfield is a very “newbie” friendly event with a 300 meter pool swim, 10 mile bike, and a 5K run. Starting times are based on your estimated 300 meter swim which, for me, makes for a long day just waiting around.

The weather was pretty bad but, as it turned out, the bike and run were not nearly as miserable as I expected them to be. Nothing much to report other than my swim and run were a bit quicker than last year while I lost a bit of time on the bike and a lot of time in transitions. I suspect I was a bit cautious on the wet roads and having 4 inches of mud in the transition area tends to slow one down as well. Overall, I was about 30 seconds faster than last year.  Although the swim was about 30 seconds faster, I’m more pleased with how it felt. I was much more relaxed and never felt any anxiety.

Now if I could just shave a minute or two off my 300 meter time that would at least give me a much better starting seed. Waiting around for 4 hours kind of sucks. But even with the miserable weather and the long wait to get started, there’s just such a positive vibe at these events, you simply can’t wait for the next one. 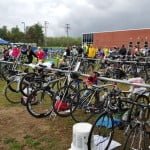 The transition area before it turned into a mud bog 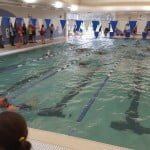 The controlled chaos of the pool snake swim 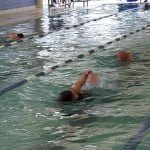 Almost finished with the swim 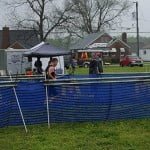 Slogging through the last 50 yards of mud

We use cookies on our website to give you the most relevant experience by remembering your preferences and repeat visits. By clicking “Accept”, you consent to the use of ALL the cookies.
Do not sell my personal information.
Cookie settingsACCEPT
Manage consent

This website uses cookies to improve your experience while you navigate through the website. Out of these, the cookies that are categorized as necessary are stored on your browser as they are essential for the working of basic functionalities of the website. We also use third-party cookies that help us analyze and understand how you use this website. These cookies will be stored in your browser only with your consent. You also have the option to opt-out of these cookies. But opting out of some of these cookies may affect your browsing experience.
Necessary Always Enabled

Any cookies that may not be particularly necessary for the website to function and is used specifically to collect user personal data via analytics, ads, other embedded contents are termed as non-necessary cookies. It is mandatory to procure user consent prior to running these cookies on your website.